As the title might suggest, Double Dragon: Neon is not a subtle game. Now out on Steam, it's a reboot of the original NES Double Dragon, arguably the most formative game for the beat-'em-up genre. The spirit of the original's gameplay is intact here, but updated with a healthy dose of humor and...well, insanity. If Double Dragon's motto was "go right and punch people," Double Dragon: Neon adds, "while dodging helicopters flying upside-down." It's an approach that exudes style, but can it match it with substance?

If you missed out on the dramatic masterpiece that was Double Dragon, you'll be glad to hear that the plot of the original has gone through almost no revision in this reboot. Bimmy Billy and Jimmy must rescue Professional Girlfriend Marian, who has been captured by the evil lich Skullmageddon for no reason. It's certainly not the most creative of storylines, but it gets the job done, more or less. The tone is much less serious this time around; Skullmageddon manages to make Skeletor look straight-faced, and Billy and Jimmy channel Bill and Ted right down to the air guitar and surfer accents.

The gameplay hasn't received too much of an update either, though there are some new twists on the formula. You'll kick, punch, jump, and run as usual, but there's also a dodge button this time around. Successfully dodging an attack puts you into "Gleam" mode for a few seconds, drastically increasing your damage. Enemies will also drop mixtapes, which can be equipped to boost your stats and grant a special attack, as well as to help level your character up as you collect more. These features add a lot more skill into the equation-but that being said, you're still going to be walking right, stopping to punch people, and walking right.

In many ways the gameplay feels clunky-running takes a second to charge up, so you're going to be walking around when you need to dodge projectiles. On top of that, some design choices are...questionable. In my playthrough, I spent ten minutes climbing up and falling off of the tank boss, because there was a barrel next to the weak point at the top, and I couldn't manage to jump to the other side of the barrel to kick it without falling off. And then I died, and had to play through the level again. There's no word for it but frustrating.

Speaking of being frustrating, Double Dragon: Neon has an online co-op mode. Technically. Right now, it's plagued with desync and framerate problems, essentially killing the "Double" part of the name. Yes, you can play with two people locally, but that's less viable on PC, unless you're running Steam Big Picture. It's really unfortunate, since the game is simply more whole as a two-player experience; it only adds features, like being able to revive the other player, and high five them, and fight to the death, and air guitar together, and...you know, cool bro stuff. On single-player, Jimmy doesn't even make an appearance.

The new artistic direction is the most significant update that Double Dragon: Neon brings to the table. It's hard not to fall in love with the goofy 80s vibe-hell, I'll admit it, I air guitared right alongside Billy at the end of each boss fight. The humor is top-notch, and the level design includes some truly creative choices, some of which will surprise even a well-worn genre buff. You've got to love when your character picks up a working pistol by the barrel, just so he can pistol whip with it. To top it all off, the music is possibly the best part of the game, boasting an addictive synthpop soundtrack that harkens right back to the arcade. 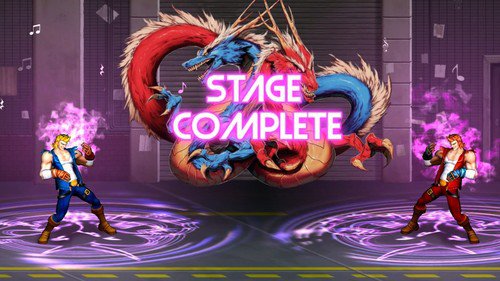 It's just a shame that Double Dragon: Neon hasn't attempted more than glamorizing the first game. Some things were great about Double Dragon, like the ability to play cooperatively-but many things don't belong in this century, like the need to fully replay levels on death, or the isometric viewpoint that makes it unclear whether you're actually punching the enemy or the air two pixels below him. It's nostalgic, but it's also anachronistic.

It's also really, really short-my playthrough lasted no more than three hours, if that. Two more additional difficulties become available after the first, but it's still not a lot of content, especially without a working co-op mode. It's not hard to think that the humor will grow old on multiple playthroughs, either. Is it really FANtastic, Billy, that you threw another fan? You just stabbed another man to death, is it really STABular?

Double Dragon: Neon definitely chose the right noble gas for its name. The "Neon" embodies the color-streaked, goofy tone of the HD remake-but when your eyes adjust, all you're really left with is Double Dragon NES. It's hard to enthusiastically recommend the game for its shortness, especially considering the bug-ridden mess that is the online experience. For ten dollars it might be worth it to take a trip down beat-'em-up memory lane, but you probably won't find much more than a nostalgia trip here.