The Wolf Among Us Episode 2: Smoke & Mirrors Review

As we saw at the end of the first episode, two murders in two days means bad news for the inhabitants of Fabletown. We were introduced to some of the important inhabitants of this mythos in the premiere episode, and in Smoke & Mirrors, the second episode of Telltale's Fables adaptation, it's quite clear what Bigby's motives are now: He's on the hunt to find this killer to find out who really is...The Wolf Among Us.

Okay, enough melodrama. The opening scenes of Smoke & Mirrors are surprisingly unimpressive, besides a brief look at the Mundies' police force. You play through a fairly dry interrogation scene that really doesn't offer anything a good-cop-bad-cop movie wouldn't give you. Also, the lack of player choices is noticeable pretty soon in. Luckily, right after the episode's opening credits, the story takes off and doesn't look back.

The focus stays on Bigby for most of this episode, and while he is centric to the story, I still can't shake this bad taste in my mouth whenever I hear him talk about crime or smoke a cigarette while looking at something. He's getting to be a little too noir-cop-generic. Now, writing a character that has been proven to work is totally alright, but I know Telltale is more daring than that. At least, through player choices (which are significantly lowered in number this episode) and borderline out-of-character speech options (emphasis on borderline, this is a good thing), one can keep Bigby pretty colorful and intriguing. 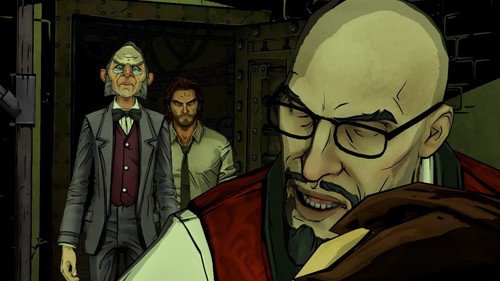 With that in mind, the episode follows Bigby's continued hunt for the murderer in Fabletown. We're introduced to a few new characters, all of which are intriguing and fun to talk to. I've yet to see a character in this series that isn't grappling with legitimate problems and scared of who to trust with them. This is important because, as we've seen with Telltale's last game, The Walking Dead, complex plots are unnecessary, but complex characters are.

Time and time again, I've been blown away by Telltale's sound design. There's a scene in this episode where Bigby visits the Witching Well, and the sound is just phenomonal. There's a dripping sound effect to create an atmosphere, a very slight but potent backing music track, and it's topped off with some of the best voice acting that video games have to offer. In fact, the entire Witching Well scene in this episode just seems like the quintessential demonstration of what Telltale has to offer for video games. It's just a gorgeous sequence.

Telltale clearly recognized the potential for shock and awe in the revelations of a fable's fable (for lack of a better phrase). This aspect of the Fables mythos is the most important feeling to the players. The main draw of Fables is the contrast between the fluffy fairy-tale characters and the gritty transformation/setting that the events of the fiction take place in. Telltale has mastered these character introductions in this episode, where we see Bluebeard, the Little Mermaid, and Georgie Porgie (who has the best dialogue writing of the game so far) and their relationships with Bigby.

The episode ends with a revelation in perfect form. Telltale's writers do a fantastic job of not relying on cheap twists and intricate, hard-to-understand plots, instead creating complex characters with serious problems and letting them breathe in a flourishing New York City landscape. While lacking in the choice structure that Telltale markets to players, Smoke & Mirrors tells a grandiose story that keeps us grounded in reality, our imaginative minds floating just off the ground, just as a story should do to us.