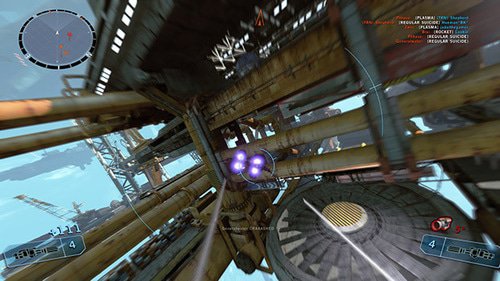 Capturing the essence of the old school style of arena shooters made infamous by Quake 3 is a difficult task-especially in a time where slower, more deliberate military shooters reign supreme. Taking that high-skill, twitch gameplay and packaging it with the six degrees of freedom from a flight simulator is an entirely different notion on its own. Strike Vector manages to find a sweet spot between the feeling of arena frag-fests of old and excellently mixes it with the unique twist of aerial combat, making a fun core experience that is rough around the edges.

Mere moments after loading into the main menu I found Strike Vector isn't coy at all about what it is-namely being a purely competitive multiplayer game. There is no single-player campaign to be found, no backstory that drives your motivations in the world of Strike Vector. There is a singular guitar riff that underpins the menu system that is mainly filled with a server list and a bare bones text tutorial. For better or worse, there is just you and all the other players waiting to blow you to bits to consider.

The lack of polish in the initial presentation of the game thankfully was put firmly to the back of my mind as soon as I dove head first into multiplayer. I was first dropped into a menu to customize my jet's loadout before being sent out into the fray. Choices are relatively simple, with the most obvious offerings being the choice of one of eight different guns to equip to your left and right side of your ship. The choices go from the standard gatling gun and rocket launcher to the more unique with a plasma sniper rifle, all of which can be tweaked by equipping two perks to each weapon -- all of which are unlocked at the beginning of the game. A passive ability to give you bonuses like additional armor or movement speed and a utilitarian active ability that can give you access to items such as mines and temporary stealth round out your kit.

In my first foray into a game of free-for-all deathmatch I choose to go basic with a pair of gatling guns, some extra armor, and an active speed boost in case I got in a sticky situation and needed to get the hell outta dodge.

The game's pace is incredibly fast, and maps center around intricate structures of pipes, frames, and twisted metal that are deathtraps to the uninitiated, even without foes close on your heels. My first few lives I would try and pursue foes only to find myself frequently crashing in a fiery spectacle as I grazed the environment that the more adept would nimbly maneuver, and my inability to evade pursuers made me cannon fodder at best. Soon I learned to use the ability to switch my jet to a floating harrier state that I could use to break and adjust my ship in any direction to make the tight turns and use my freedom of directionality to become elusive and attack from multiple angles.

Changing my mentality of movement within the space of Strike Vector was my first step toward becoming a better player, with my next challenge to surmount being by abysmal choice of firepower. Gatling guns weren't working for me. At the game's speed, I couldn't find the accuracy I needed to be effective with them. I switched to a set of swarm missiles that would track down and hit the nearest targets within a certain distance. Spamming them was met with some success and my first kill, but they were also netting me team kills for their penchant to track down the nearest target. I found my personal sweet spot with a homing missile and shotgun combination, putting pressure on from a distance while packing a potent punch in close range engagements and pursuits. The adjustments took me from consistently in the negative, to netting kills much more frequently and even ending games with a positive kill-to-death ratio. 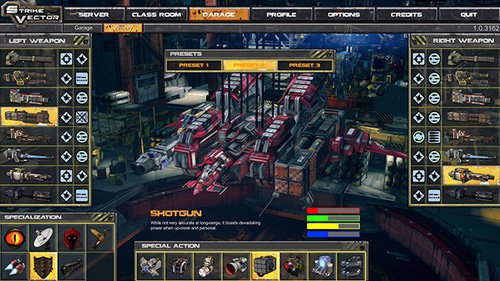 The game has been properly made to be unrelentingly brutal, tailored for the skilled to survive and the weak to suffer at their hands. It's a small wonder to go from the first few hours of being hunted to a deadly hunter, and I haven't played a game in a long time that felt so rewarding to merely end a game with a zero in the kills category. Not to mention the mesmerizing feel of bobbing and weaving through complex structures after getting the hang of the game's handling that made me feel like I'm living the trench run from inside the Death Star in Return of the Jedi. It's truly an engrossing experience.

Unfortunately, delivering an uncompromising multiplayer experience is also a double-edged sword for Strike Vector. Comprised of only four game types-deathmatch, team deathmatch, domination, and the tag-like bounty hunter game mode-and only cosmetic unlocks and personal skill growth as your main source of progression, there isn't much incentive to continually come back for more. Even worse, some games can linger in length when players constantly suicide into structures, making 25 kills seem like an impossible number to accomplish. It will surely find its niche with a hardcore community of shooter fans, but many will find its skill gap frustrating and without reward-not even Steam achievements- for the time they will put into it.

For a game that was developed in only 15 months by a small development team, Strike Vector is quite the feat. Mechanically sound and a deep learning curve make it an excellent title for the shooter elite. What it lacks is polish and systems to reward players to continually keep playing and improving. Those looking for a fun time with a shooter that feels fresh and unique will find Strike Vector more than worthy of their time.